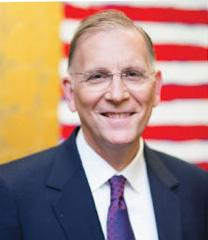 You may have guessed that Taylor King is the founding attorney of the Taylor King Law firm. He opened our first office in 1994 and has been practicing law for more than 30 years. Those who know him best would describe him as “laser-focused,” which is good news for his clients and bad news for his golf opponents.

He first put down roots in Arkadelphia as a student at Ouachita Baptist University, where he received degrees in political science and history. After attending the University of Arkansas School of Law in Fayetteville, Taylor and his wife, Terri, moved back to Arkadelphia in 1986 and have been proud to call it home ever since!

If you catch Taylor out of the office, he’s more than likely spending time with his family or working on his farm. For 15 years, you would have seen his faithful companion, Buddy the golden retriever, by his side. Though Buddy passed away in October 2016, he was a member of the Taylor King Law family and is deeply missed.